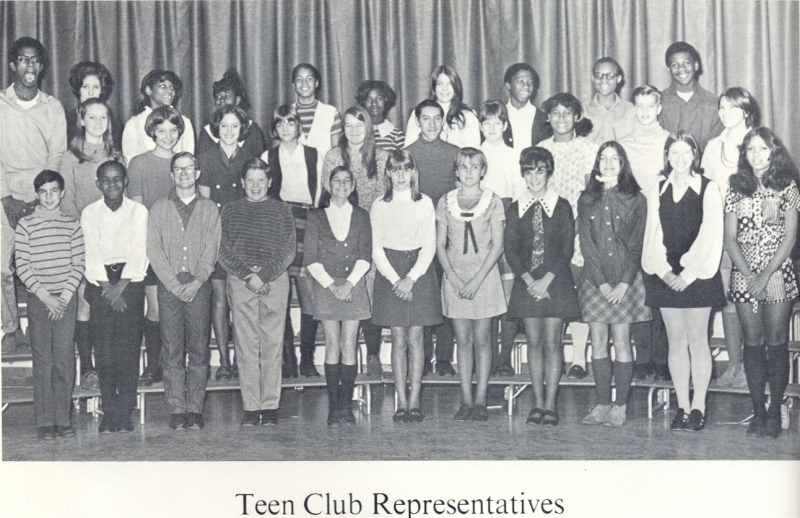 My mom, Lois Adams (1929-1996), ran the Benjamin Stoddert Teen Club from 1968 through 1971.  The following is my recollection of those years and all of the fun we had on those Friday nights. 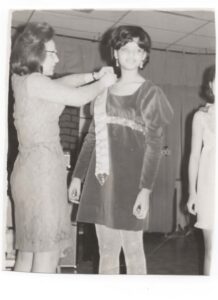 – Looks to be a “Sweetheart’s Dance”, or perhaps Sadie Hawkins Dance, around late 1969/early 1970. Noty sure who the girl is on the left, as well as the young man crowning the winner, the girl being crowned, and the girl to the right.

Thanks to the many Chaperones and Volunteers that assisted in running the Teen Club.  Here are just a few:

As you walked into the main entrance of Benjamin Stoddert, turned right down the hall, the tables would be set-up where you registered for Teen Club that evening.  The registration process was a 5×7 index card completed by your parents at the beginning of the school year with your name and address and the dates of the Teen Club for that school year.  You were checked off for that date, paid the $1 entrance fee and allowed in.  Several chaperones and an off-duty police officer made sure no one left before 10 o’clock unless their parent was there to pick them up early.

The cafeteria and stage down the hall and to the right was used for the band and for dancing.  The gym to the left was used for playing basketball – mostly by the guys who were scared to ask the girls to dance. The majority of boys that did dance, only did so during, slow dances. I’m sure many boys and girls decided to, “Go Steady”, right there on that dance floor, as well as a good number that chose the Teen Club venue to break up.

The gym was open and run by Alan Smith (now Dr. Alan Smith) – a family friend from Broadview Baptist in Camp Springs.  Most of the guys played pick-up basketball or “horse”.  Alan did his best to control the guys from beating each other up.  The girls checked out the guys from the entrance, who seemed to like playing basketball more than dancing.

Mom, her sons (Ron, Rod, Kirk), and a group of family friends and students would scour the Washington, DC area looking for bands that would play at the Teen Club on Friday nights for $75 to $200 for a gig.  They would travel to all areas of DC and the local counties searching for talent.  One of the bands – All The King’s Men – a 10-piece band from DC played at the Stoddert Teen Club for many years.  They were awesome!  Unfortunately, I cannot remember other bands, so if anyone out there remembers a few, please feel free to share the names and experiences with us. A couple of guys (Bill Tillett and Art Merriman?) created groovy (at the time) “psychedelic” images onto the band, using an overhead projector, mineral oil and food coloring on a transparency. This resembled what some bands like the Jefferson Airplane used as a “light show”.  At the time it was pretty far out and hip.

The security was provided by off-duty, local jurisdiction police officers.  The officers did a fine job at controlling the crowd and making sure no one got out of line – all for $15 for the three hours of work.  They also patrolled the perimeter of the school grounds, controlling the older high school kids who tried to “crash the party”.

There were a few incidents that kept the security force busy:

Metal trash can through the cafeteria window that caused quite a stir – luckily no one was injured.

Several fights that broke out on the outside street corners, along Olson Street, across from Stoddert.

Sadie Hawkins Dance (where the girls asked the boys to dance) – Sure way to clear out the Gym for the evening and give Alan a break!

Mom also sprinkled in a surprise night (unannounced) where everyone got in free for the evening.  Another extra $1 to spend at the Marlow Heights Hobby Shop or Marlow Fair Lanes Bowling Alley on St. Barnabas Road.

Cokes (6.5 ounce returnable bottles of course) were sold for 10 cents.  Candy supplied by the Potomac Athletic Boosters (courtesy of Mr. Russell) could be purchased for 25 cents.  Most of the proceeds from the candy sales went to the Potomac Football Team.

Feel free to add your “special moments” of those fun Friday nights at the Teen Club! Check this page for photos of Teen Clubs past, and maybe, just maybe, an actual film clip of kids gettin’ down on the dance floor during a Friday night long ago. Also, anyone with their own write-up and photos to contribute from your junior high’s Teen Club, send it to me and I’ll see what I can do about adding it to the site. There were plenty of you that attended Taney, Shugart, John Hanson, Foulois, Suitland, etc., and I’m sure those schools had similar dances as well. 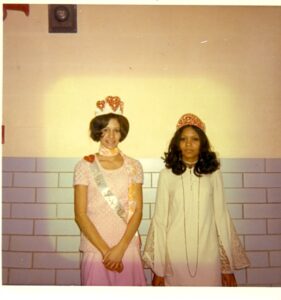 This photo, which I’m going to guess is from 1968 or 1969, features a couple of Stoddert girls in what I believe is a, “Miss Sweetheart”, dance from Teen Club. On the left is Merry Giugni, and the girl on the right is Debbie Streeter (Potomac ‘73?)